In 2005 I watched, ‘Around The World In Eighty Treasures,’ a BBC documentary that follows presenter Dan Cruickshank around the globe, visiting his pick of the wonders of the world. Each of his treasures was intriguing, but one in particular captured my imagination. He called it, ‘The Faces Of Bayon.’ A towering structure covered with over two hundred carved faces. Something about those serene smiling faces hypnotised me. I had to see them for myself, but there was a problem, they were in Cambodia.

It may seem strange now, but in the early part of this century, Cambodia was not somewhere people generally wanted to visit. It was a place you read about in newspaper articles full of words like genocide and killing fields. I remember watching documentaries about millions of unexploded landmines littering the countryside, causing thousands of people to lose their limbs.
Starting with a civil war in the early seventies, Cambodia went through three decades of hell. The war resulted in a communist government, the Khmer Rouge, that killed millions of its own citizens. Only as the country reopened were the true horrors of what happened revealed to the outside world. To say Cambodia was decimated, even in the literal sense of the word, would be an understatement. From a population of seven million, Pol Pot’s government systematically murdered over two million people. It’s believed almost four million Cambodian’s lost their lives in the nineteen seventies. Of those who survived, more than half were under fifteen years old, and few were over the age of fifty. Cambodia now has one of the youngest populations in Asia.
It would take years for Cambodia to recover, but its youthful population was keen to look to the future rather than dwell on their tragic past. As stability returned, so did the tourists. Visitor numbers crept up through the late nineties until something as banal as a Hollywood movie seemed to tip the balance. In 2001, Angelina Jolie starred in Tomb Raider. A movie based on a video game with a few scenes filmed at Angkor Wat and Ta Prohm. After the film’s release, tourism skyrocketed. By the time I arrived in 2006, the backpacker trail had become well established. 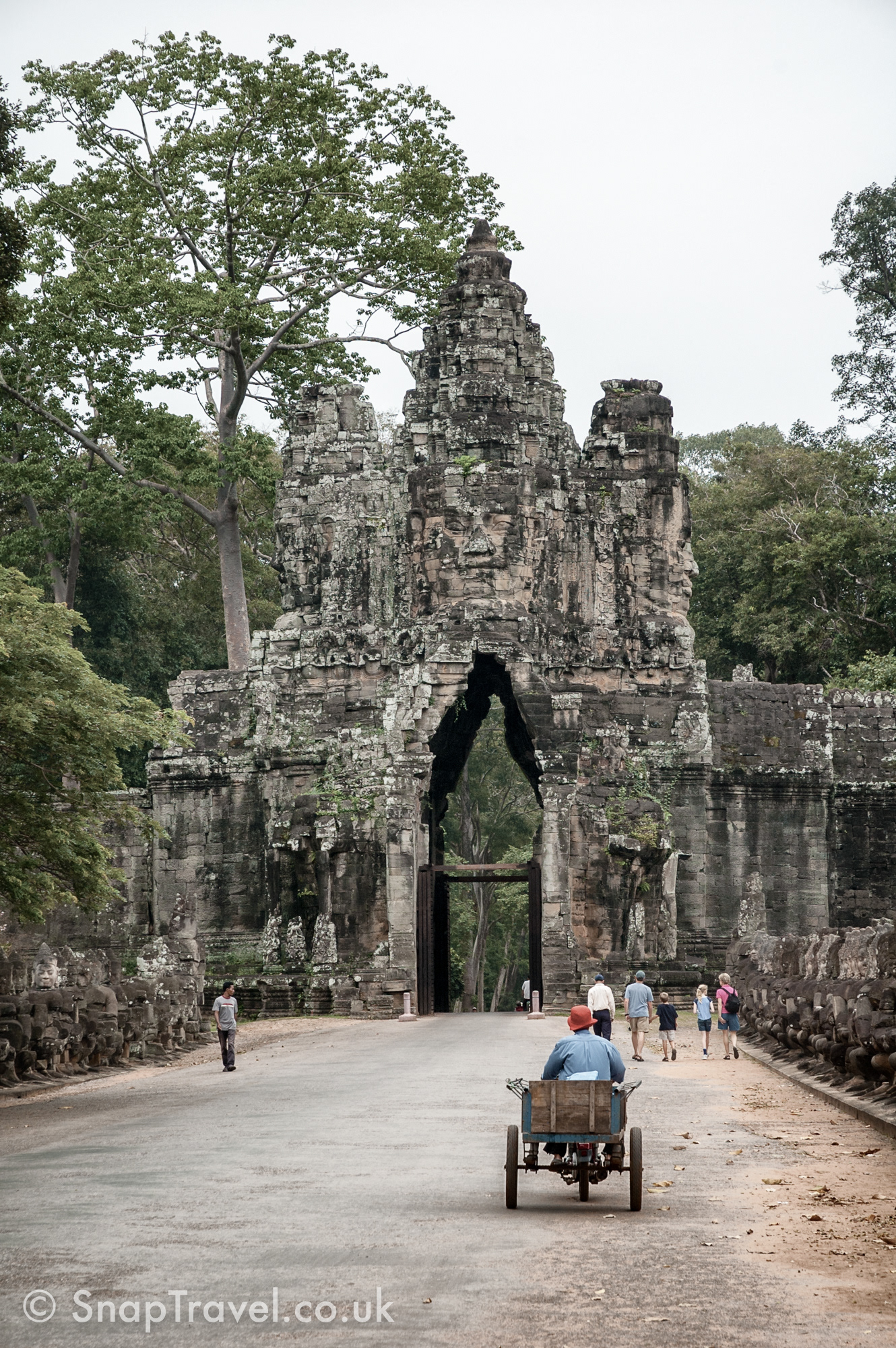 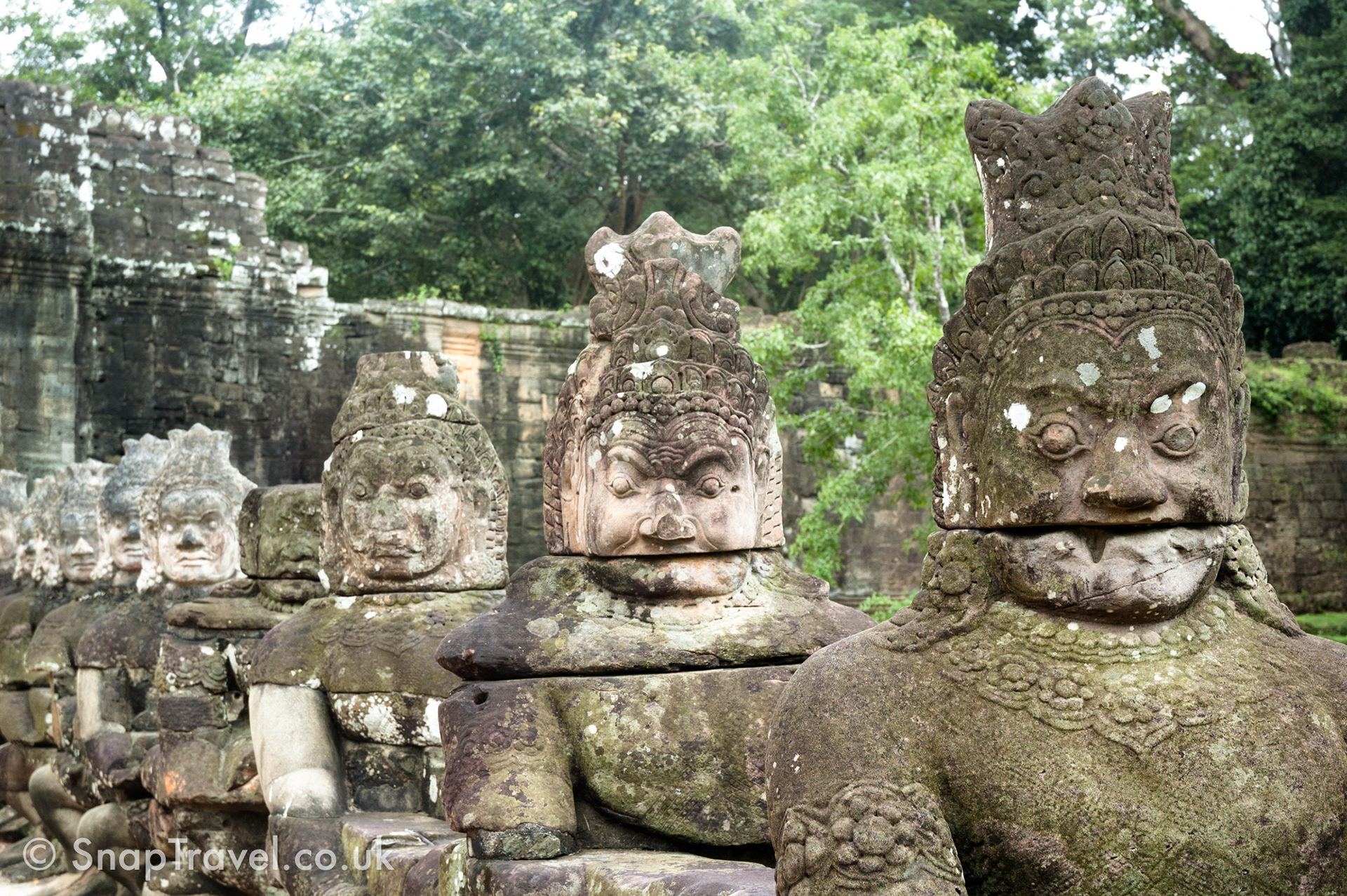 I was in Siem Reap, a town in the northwest of Cambodia. Due to its proximity to the famous Angkor temples, Siem Reap is a fast growing tourist town. From here, I hired a push-bike and set out early the next morning to ride three and a half miles to Angkor Wat. I spent the morning looking around this spectacular temple. But, unlike most tourists, Angkor Wat was not my reason for being here. Those smiling, ‘Faces Of Bayon,’ imprinted on my mind the year before, were so close now.
That afternoon I rode just over a mile further north from Angkor Wat to find what I was looking for. I arrived at the gates of an ancient city called Angkor Thom. This city was the last capital of the Khmer empire. A five and a half miles squared city, protected by high walls and a moat. Established in the twelfth century by King Jayavarman VII. The name Angkor Thom means, ‘great city,’ and it’s believed at its peak, over a hundred thousand people lived here.
I arrived at the south gate. Atop the gatehouse, I got my first view of the faces, smiling down at me as I crossed a bridge over the moat. Lining either side of the bridge were rows of Devas and Asuras playing tug of war with a giant multi-headed Naga snake. They looked like men and demons pitted against one another.

After passing the gatehouse I followed the road heading for the city centre and the Bayon Temple. There are many temples inside the city walls, but few signs of the housing. Perhaps the jungle has long since reclaimed the more fragile housing, as it’s in the process of doing with the stone temples. Right in the centre, I found the Bayon Temple. As I approached, I struggled to pick out any faces. It was only as I drew nearer, I realise the temple was covered in faces. In fact, it was hard to find any space that didn't contain a face. 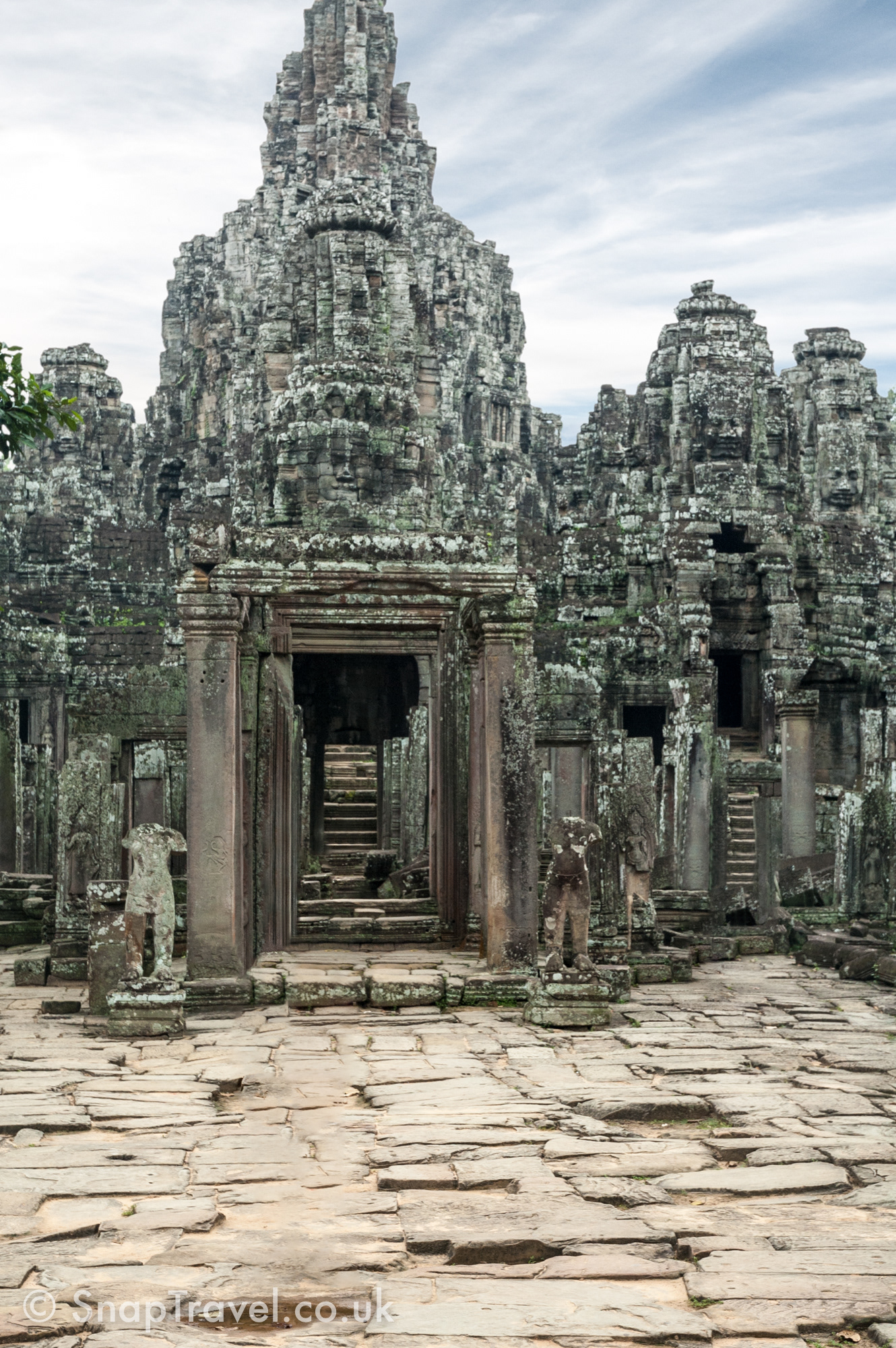 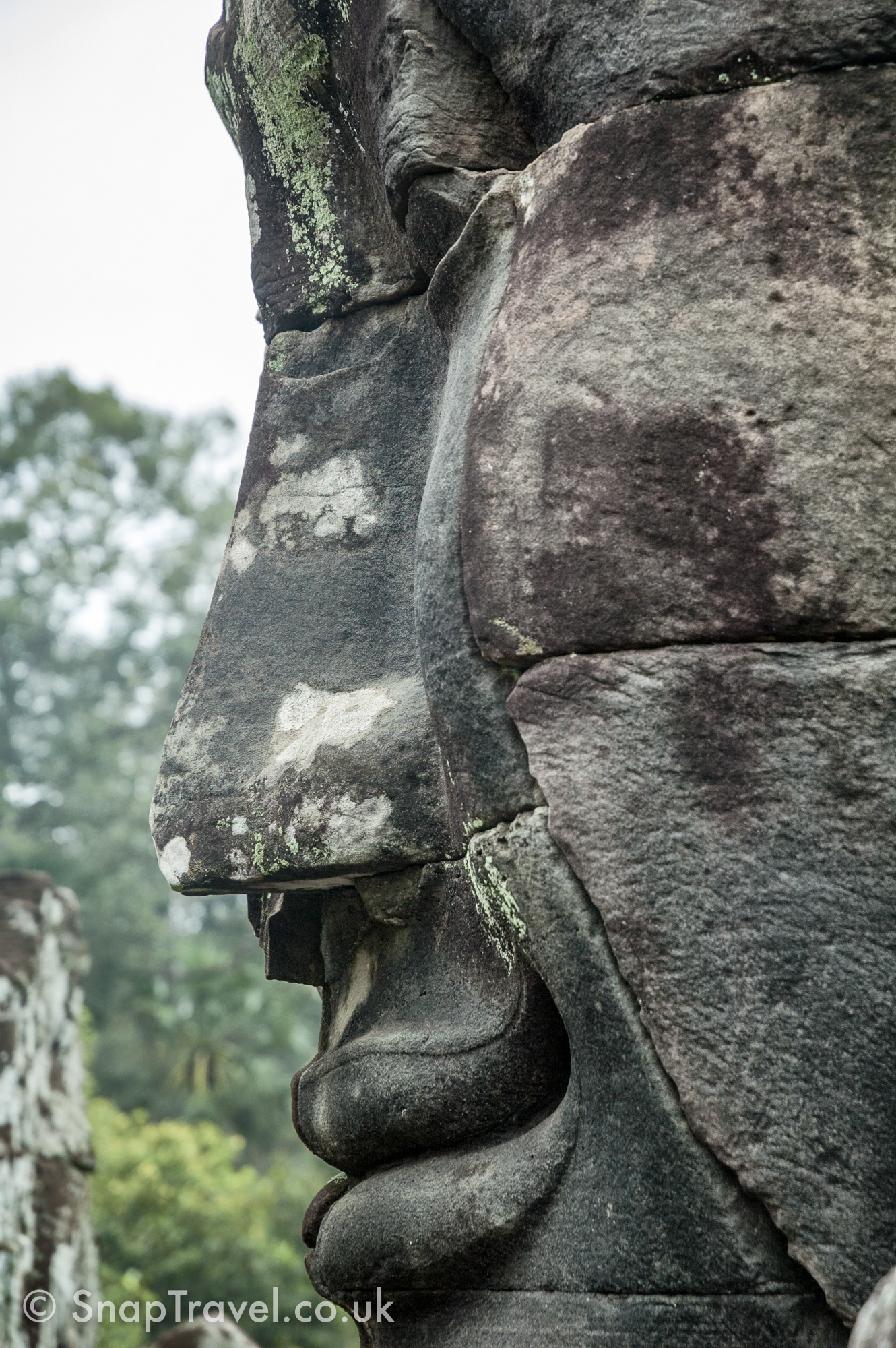 Finally, I was looking at the Faces Of Bayon. On closer inspection, they looked as beautiful and hypnotic in person as they had been on the TV. They have a closed mouth smile, not a grin or a smirk, but a peaceful, knowing look of contentment. No one is sure if the face is that of the King or a God. I personally think they must be a divine being, I mean I’ve heard of narcissism, but over two hundred giant carvings of your own face on one temple would surely be a bit much, even for a King.

I spent the rest of the afternoon exploring Angkor Thom. As the heat of the day finally waned, I watched the sunset behind the stupas of the Bayon Temple. Until I realised I had to ride five miles back to my hotel in Siem Reap. A peaceful afternoon ended with a rather frantic race against the fading daylight. The Faces Of Bayon watched on with knowing smiles as I scampered away, leaving them to watch over their lost jungle city.

How To Blend Images Together With Adobe Photoshop

How To Replace The Sky

Guide To Wilcawain
↑Back to Top